On the Thursday before half term, pupils from Years 3 – 7 were treated to a play avec une différence, called ‘Ecris-moi’, a French Onatti Theatre production with professional French actors. The play was about two teenagers, one French and one British, who were surprised to find out that their pen pal is not quite the person they thought he/she was!

It proved to be a very worthwhile and enjoyable experience, in which pupils developed their listening skills whilst having a lot of fun. Some of them were even asked to help with the props in the story and there was plenty of audience participation!

Here are some of their comments afterwards: “It was easy to understand because of the visuals and some help in English”; “I thought it was absolutely amazing!”; “It made me happy and I could see lots of smiling faces in the audience”; “I learnt some new phrases”; “The acting was of a high standard”; “It was a fun way to learn”. 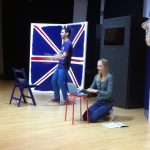 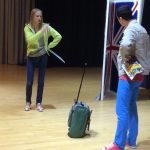