Last Wednesday, Year 5 pupils had a super day out at the Imperial War Museum at Duxford. Everybody dressed as evacuees, and they walked through the trenches, saw planes and tanks and an Anderson shelter as well as many other artefacts from WW2.

The highlight for many was talking to eyewitnesses who were children during WW2 and who are now war veterans. The children were also excited to go on the Concorde plane and to see all of the complicated controls inside! 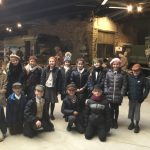 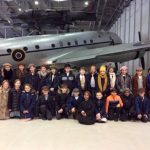