The under 11 boys cricket team topped off a brilliant sporting season with victory in the recent annual Harlow schools’ cricket tournament.

Unbeaten in their three pool games, the team progressed onto the knock out stages against St Albans School. Some great bowling by Omar and Johnny prevented St Albans accumulating runs. When it came to batting, Thomas and Jasper hit some fantastic boundary shots and secured our route to the final.

We faced Church Langley in the final who had won the tournament consecutively for the last four years. They set us a target of 88 runs which was a high score. However, the Saint Nicholas boys were now in full stride and smashed a number of ‘sixes’ and ‘fours’ to secure an amazing win, beating Church Langley by an impressive 28 runs!

The Saint Nicholas team now goes on to represent Harlow in the Essex finals at Billericay Cricket Club. 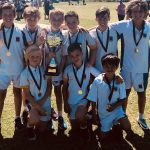