Saint Nicholas School’s first World of Words Day took place at the end of the last half term, with the weather just about playing along.

Of course, the event actually kicked off the day before, with the ‘Bake Your Book and Eat It’ cake competition. This competition proved incredibly popular, with a record number of 52 cakes being entered. The majority of the cakes were produced by the lower school and therefore the category boundaries were adjusted accordingly. The standard was very high and the judging extremely difficult, but the results of the competition were as follows:

Well done to everyone who entered. There were so many cakes and the majority were sold at a bake sale on Friday in support of Edie’s Butterfly Appeal while most of the others were sold to staff. A very special thanks must go to Mrs Ridley-Warren and the Year 9 food technology pupils who worked hard in ensuring that all entries were accounted for and that the cake sale stall was manned.

Aside from the bake sale, World of Words Day was a day filled with words and their applications. Pupils attended lively workshops by the poet Josh Seigal as well as hearing spell-binding stories by storyteller, John Harris. There were several opportunities for children to collaborate across the key stages which were relished by the pupils. Year 7 pupils thoroughly enjoyed their buddy-reading session with
pre-school children, while the Year 8s visited Year 2 and Year 3. Year 9 pupils outdid themselves in preparing story trails for Reception and Year 4, with the monster story and the teddy bear story proving particularly popular.

All in all, the day was a wonderful chance for everyone to explore the creative applications of English. Many thanks must go to Miss Marston, Miss Perez and Mr Wilson who all presented workshops during the course of the day and to the Friends who sponsored the prizes for the cake competition as well as buying word games for lower school to be used, not only during the day, but also as a literacy resource. 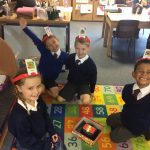 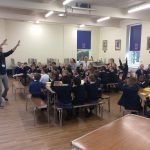