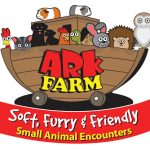 We are very excited to be welcoming Ark Farm to Saint Nicholas on Friday 1st October for our first open day event, which is exclusively for prospective Reception pupils (and their parents) for the September 2022 and 2023 intake. This will be a fun, unique and hands on experience for the children.

If you are considering Saint Nicholas School for your little one, feel free to get in touch by calling the Admissions Secretary on 01279 429910 or by emailing admissions@saintnicholasschool.net to find out more about this exciting event.

On Wednesday 28th February the Onatti Theatre Company came to the school once again to entertain the German pupils.

Ellie, Year 9
On Wednesday, all of Year 7 and the rest of the German pupils were fortunate enough to watch a comical German play. The play was very entertaining and very interactive with the audience. A wide variety of German language was used and I’m sure that everyone knew some phrases at some point during the performance. Well done to Saskia and Lewis for their great use of German when they were asked to help out. I was also asked to participate in the play. I helped out with the ironing and acted as the younger sister, so also got to use my German speaking skills.

Overall, the performance was very educational as the actors gave the audience small hints as to what different words meant in English, meaning that we all learnt something new. We all had a great time watching it and are very grateful for this wonderful opportunity. Thank you to both actors and everyone who was involved in the play.

Alex, Year 7
The German play was really good. I understood so much of what they were saying. They were really comical and I liked it when they brought people up from the audience. It was a really nice way to finish off a school day.

Zen, Year 7
The play was about a teenager who invited different girls to his house. He preferred one particular girl, but the girl he didn’t like so much really liked him. There were two actors, one of whom played four different people. I really enjoyed the play and I understood some of it.

Ella, Year 7
I liked the German play because I understood more than I thought I would!