This year’s Epping Forest Inter Schools Karate Championships saw sixteen schools battle it out with over 180 children from local primary schools taking part. This was a 30% increase on last year’s participation numbers!
This year saw sixteen kata events and eighteen kumite events, delivered by the highly experienced United Karate Association team that hosted the event. There were cups for the overall top three school teams and also for the top three small schools. The latter was a new award for this year.

The annual event was supported by an enthusiastic audience of parents and volunteers who cheered every effort and everyone was grateful for their support.

Before the main presentation there were three awards presented for ‘great attitude’, one of which went to a Saint Nicholas pupil. Congratulations to William in Year 3 for winning this award.

In each event, ten points were awarded for a gold, eight points for silver and five points for bronze. The top eight scores were then counted to make the school’s total.

The medals were presented by Sensei Luke Cuthbert who is the current English and WUKF World champion and a local coach at several of the schools taking part.

In the small schools category the results were as follows:

It was very close and despite the first and second place schools having the same number of points, Coopersale Hall eventually won narrowly on count back as they had won two more silver medals than Willingale.

All in all it was a fantastic competition and we are grateful to UKA for holding the event. Congratulations to all of the Saint Nicholas participants who did themselves and the school proud. 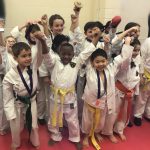