Last week, Year 4 went to Mountfitchet Castle as an exciting start to their 1066 topic. Lots of fun was had climbing the turrets and peeking through the arrow slits while trying to spot any invaders. They pretended they had committed treason and enjoyed putting each other in the stocks, even if they weren’t very comfortable! They also learned about Norman battles, the weapons they used, the heavy armour they wore and even got to practise sword fighting and jousting!

A particular highlight was when the children were allowed to fire the catapult – they had to pull hard on the ropes to try and make the water balloon fly as far as possible. They thought that this was great fun!

The castle was home to lots of animals, just as it would have been in the Norman times and pupils got to feed the deer and peacocks.

Lots of fun was had by all and it was a great way to enrich the children’s learning outside the classroom. 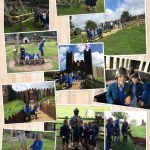