Last Tuesday Robert Halfon MP visited the school after a number of Year 9 pupils wrote to him. Here is a report written collaboratively by Year 9.

On Tuesday, Robert Halfon came to visit our year group. We had previously been studying how our words can change the world and several campaign groups wrote to him to express their concerns about certain modern issues such as diseases in the black community, the endangered Maui dolphins and deforestation. He was so impressed with our interest in the world that he decided to come to our school and speak to us personally.

We asked him many different questions about his career including what he thought about politics and how he came to know that he wanted to become the MP of Harlow. Interestingly, Robert had wanted to be an MP since the age of ten. We couldn’t help thinking that at that age, all we thought about was Ben Ten! He also spoke about how busy it is to do the job of an MP, gave his opinions of social media and provided statistics about our campaigns.

We were very intrigued when he told us about his Chief of Staff, who started working, just like one of us could, during her work experience time. We were moved by his determination as he described that when he was born, the doctors told his parents that he would never be able to do anything with his life and would have to go to a special school due to his physical disability but he didn’t listen and managed to achieve and do so much for the country. We were also fascinated when he told us about inspirational politicians who have used their words in parliament to influence laws and decisions, especially when they went beyond party politics.

It was amazing to have him come to speak to us and take such interest in the issues that we wrote to him about and we feel like we all learned a lot from him. 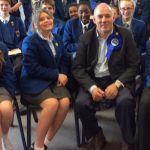 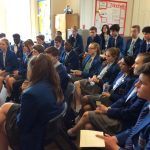