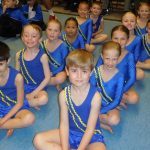 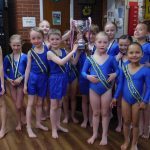 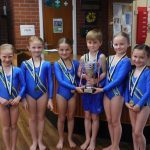 Over eighty gymnasts from eight Harlow schools took part and Saint Nicholas entered two teams at each of the two age groups. All the pupils performed well and really threw themselves into the occasion.

Year 1 and 2 pupils were extremely competitive and Mrs Fitch was very proud of both teams. A big thank you to Ruby and Theo’s mums who have helped at every training session and were also very busy helping on competition day. The A team became champions on the day and the B team took third place, only narrowly missing out on second place with Water Lane team beating them by just point seven of a mark. Mrs Fitch was delighted to tie the blue and yellow school ribbons back on the trophy for the third consecutive year.

Meanwhile, the Year 3 and 4 teams worked incredibly hard and also competed gallantly, taking second and third places in their age group. The A team were only 1.6 marks behind Jerounds, the eventual winners. These teams have been trained and encouraged  by Mrs Hill with the help of Olivia in Year 5. Many thanks to both Mrs Hill and Olivia for their hard work.

All Saint Nicholas team pupils were a credit to the school, not only because of their sporting success, but also due to their sporting attitude in helping members of other less experienced teams. A special mention goes to Esme as she guided team members who were new to the competition through their routines so that their experience at their first competition was a happy one. Esme will be awarded a special lower school PE certificate in recognition of her help to others at this event.

The victorious Year 1 and 2 A team will now go on to represent Harlow in the County Key Steps Competition which is part of the Essex Summer Games at Basildon Sporting Village on Thursday 29th June.

Huge congratulations to all competitors for a very successful competition.