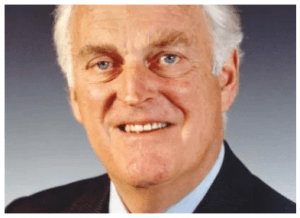 We were all saddened to hear that Sir John Swire, the School’s benefactor, had passed away at the age of 89 in December.

He grew up at Hubbards Hall, built originally in 1469 as a monastery, (now called That Amazing Place), and Hillingdon House was built by his Father in 1907, initially as a hunting lodge and stables for the family to entertain friends and guests. During the Second World War the Swire family granted Hillingdon House as an annex to Harlow Hospital to treat wounded soldiers.

Sir John subsequently founded the ‘Sir John Swire St Nicholas School Educational Charitable Trust’ and granted the lease of Hillingdon House and the grounds to the School at a peppercorn rent in 1977.

This was organised by the School’s past Chairman Ian Liddell who chaired the Board of Governors, (and was himself a past pupil of Saint Nicholas), from 1973 to 2000. He facilitated the building of Swire House which was opened by Sir John and his wife Lady Moira in 1997.

Sir John’s family business, John Swire and Son, was founded by his great, great grandfather, the first John Swire, in 1816 and has grown to become an international conglomerate, based in Hong Kong, in finance, property and shipping with a majority interest in Cathay Pacific airlines. Sir John became Chairman of the Group in 1966 and Honorary Life President in 1997.  He was awarded a CBE in 1977 and knighted in 1990.

Sir John and his wife took a great interest in Saint Nicholas, paying much anticipated visits to tour the buildings and the grounds, taking a special interest in the trees at the School – especially the oak trees at the front, planted by his father Jock.